A guide to Cryotherapy 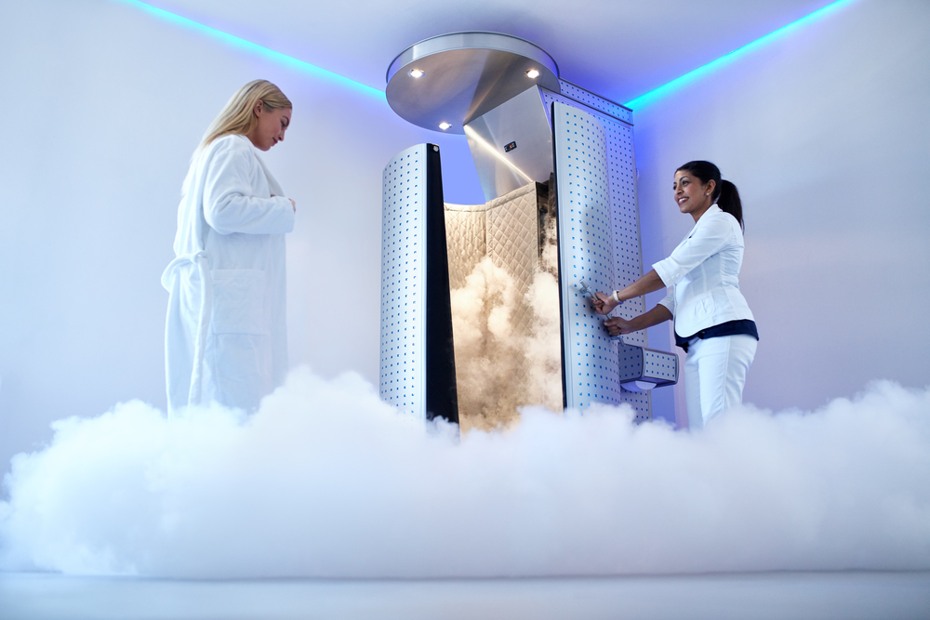 “Cryo” comes from the Greek word “Krous” which means “icy”, “cold” or “frost”

The practise of Cryotherapy is the practice of using ice, or very cold materials, to help treat a problem. An ice-pack or a very cold wet sponge loosely constitutes as being Cryotherapy, but there are two main types of Cryotherapy treatment.

The idea of using ice to cure, or stimulate health benefits, isn’t as new as you may think. Thousands of years ago, Hippocrates wrote about the pain-relieving benefits of using ice, which has subsequently been revitalised in the late 20th and 21st century and caused an upsurge in its practice around the world.

There are two different forms of Cryotherapy and used for two noticeably different reasons. Cryotherapy is used by doctors and medical professionals alike to help treat some instances of cancer by using ice in specific areas of the body, whereas Whole Body Cryotherapy (WBC) is used to aid recovery of injuries and some conditions such as arthritis. The latter has been used by various high-profile athletes for sporting injuries, and it has since become a favourite unconventional cosmetic treatment among many celebrities.

The different types of Cryotherapy

The first uses of medical Cryotherapy treatment were to treat cancer patients by using extreme cold to destroy dangerous cancer cells. According to Cancer Research UK, Cryotherapy can be used to treat several different types of cancer and precancerous conditions, such as cervical cancer, skin cancer, prostate cancer, viral warts, seborrhoeic keratoses and other benign lesions, and in some instances, cancer found inside the body. Although it is said to work best when helping to treat abnormal cells of the cervix and basal skin cancer due to the treatment being more specific and localised. The body’s immune system can dispose of the dead tissue over the course of a few weeks. 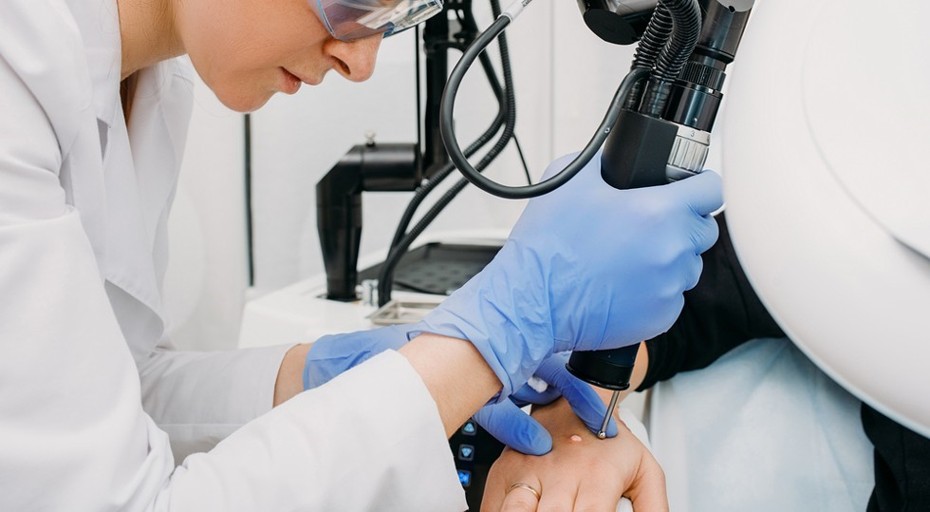 An advantage of Cryotherapy is that it helps to remove the abnormal cells on the body, which may be cancerous or precancerous, in an effective and efficient way. Therefore, this kind of procedure is far less as intrusive as an operation, so it’s easy to recover from. Typically, patients are feeling back to normal after a few days with very few side effects.

This form of treatment is usually well tolerated overall, but can sometimes be painful if a deep freeze has been necessary (for example, to treat a basal cell carcinoma). Discomfort can occur both at the time of treatment and for some time afterwards, but it is generally nothing paracetamol can’t sort out. Taking pain relief an hour or so before treatment can be beneficial to reduce discomfort afterwards.

It is common to have some swelling and redness after the treatment, as an immediate response to freezing the skin, but this will usually settle after two to three days. It is likely for the treated area to blister which may look painful to the eye, but this should settle within a few days and a scab will form. This tends to require no special attention if looked after. The area may need to be gently washed once or twice daily, and should be kept clean. If the treated area is in an area susceptible to trauma or rubbing, dressing may be advisable. The scab should peel off after five to 10 days if on the face and three weeks on the hand. A sore or scab may last for as long as three months on the lower leg as healing is often slow there.

Side effects can include: 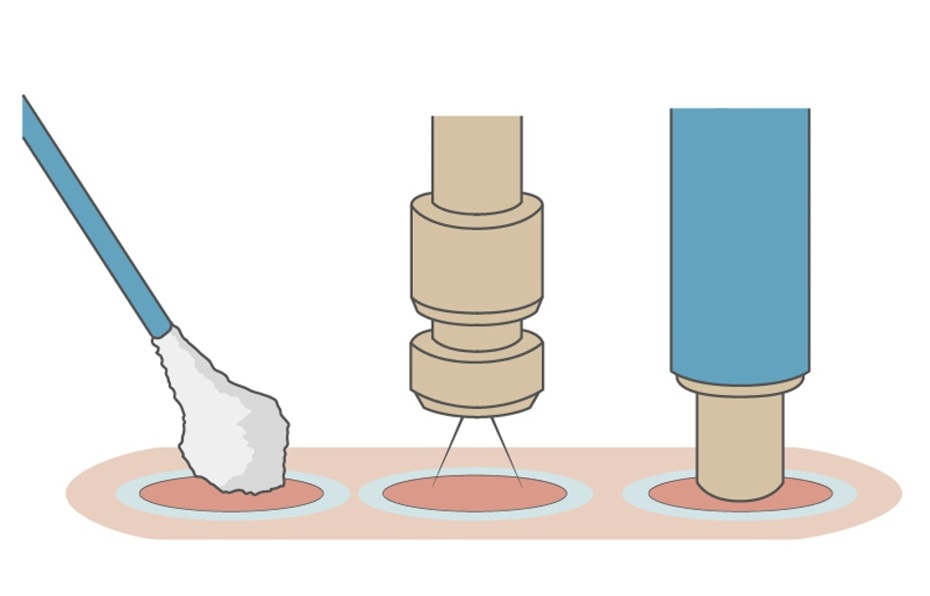 •    Pain and discomfort in the treatment area (but it should settle within a few days)
•    Bleeding from the treatment area
•    Your blood pressure and pulse may increase
•    Damage by freezing normal tissue close to the treatment area, your doctor will try to avoid this as much as they can
•    Redness and swelling is common, but not severe
•    Secondary infection may occur, but this is highly uncommon

After a standard Cryotherapy treatment for a solar keratosis, seborrheic keratosis or a viral wart, the skin may appear entirely normal without any signs of a lesion. However, Cryotherapy can sometimes result in a white mark (hypopigmentation) or a scar on the skin, particularly if the area has been frozen for a deep, or prolonged, period of time – usually required for a cancerous lesion. The white mark may be quite noticeable, especially in those with darker complexions. In darker skin tones, Cryotherapy may also result in a darker mark (hyperpigmentation), especially in sun-exposed areas, but the appearance often recovers with time. Numbness can occur following treatment but usually recovers within three to four months.

Skin lesions may fail to clear or may recur at a later date, needing further Cryotherapy, surgery or other treatment. 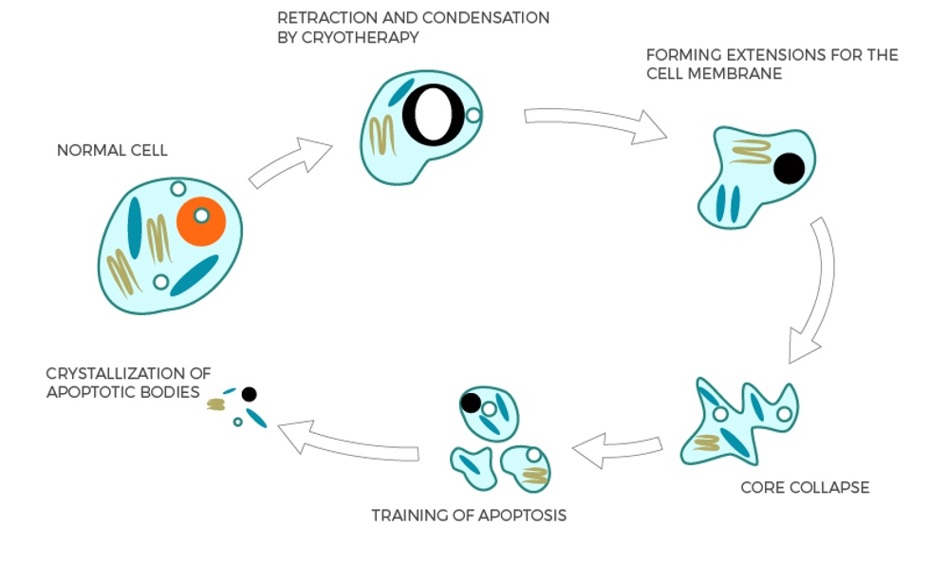 Figure 2 What happens to cells once having Cryotherapy

The procedure originated in Japan in the latter half of the 1970s, by Dr. Toshiro Yamauchi, as a means of treating rheumatoid arthritis, but it has been studied and refined over the years. WBC is a procedure involving standing in a 1.8 metre tubular chamber with temperatures plummeting to as cold as -100 degrees Celsius (and even colder) for a couple of minutes – on average, expert Cryotherapy therapists recommend between two and four minutes. You will step into the chamber in minimal clothing, other than warm shoes, gloves, a surgical mask and a headband to protect your ears, which will be provided by the clinic. These sub-zero temperatures essentially trick your body into thinking it’s dying in order to encourage a flight or fight reaction, which is said to have short-term health benefits. 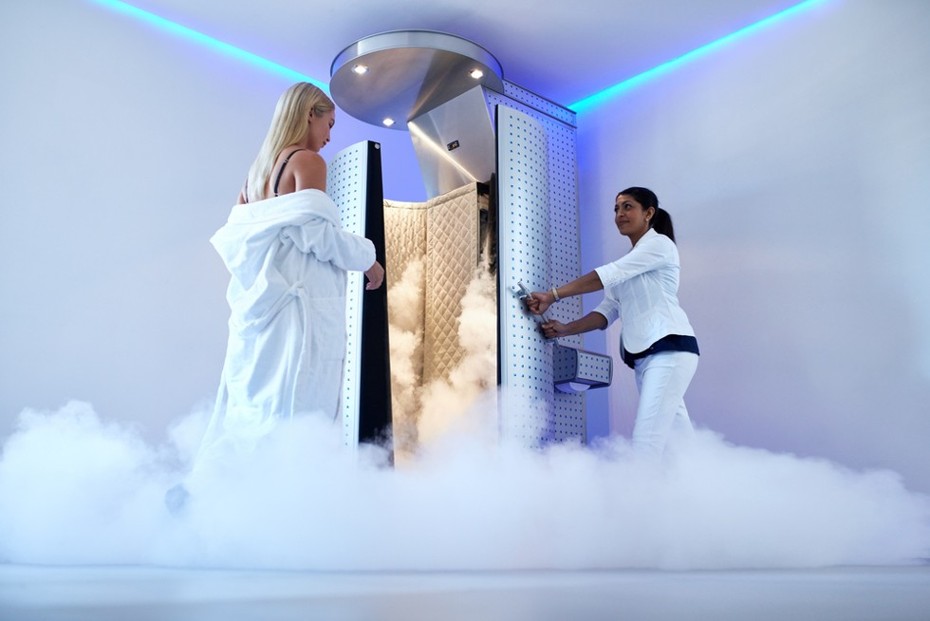 Despite the fact its primary function is to help treat chronic pain and sporting injuries, it has now taken on a whole new purpose with the recent celebrity craze, leading to the treatment being somewhat ‘glamourised’. 111Cryo, a clinic in London, says the treatment has a range of health benefits, from improving muscle recovery, helping skin conditions, as well as offering pain relief – it’s even been said to help with weight loss by boosting the body's metabolic rate which lasts for 5-8 hours after the procedure, causing the body to ‘burn’ 500 – 800 Kcal over time, which helps to increase and stimulate endorphins throughout the body, triggering a feeling of happiness and fulfilment. Reported benefits even say it can improve appearance of skin, hair and nails, and slow down aging, however there is little scientific evidence that supports these claims.

The U.S. Food and Drug Administration (FDA) has not yet approved WBC as a medical treatment, but that hasn’t stopped a string of celebrities using it on a regular basis, including American basketball player, Lebron James, actress Jennifer Aniston, model Kate Moss, footballer Cristiano Ronaldo and boxer Floyd Mayweather. 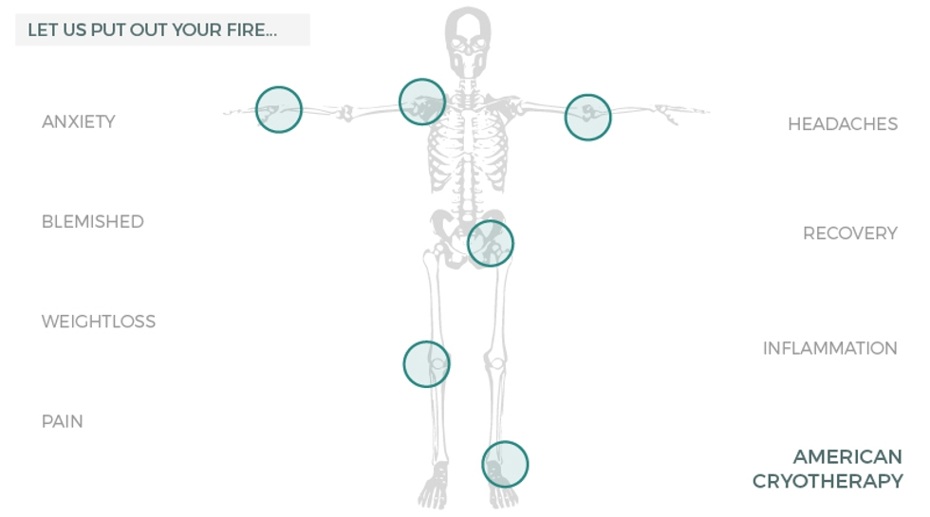 Figure 3 Where does Cryotherapy help?

Results can vary depending on the individual and the clinic. It is difficult to guarantee that the WBC will see specific results. However, it is highly likely you will leave the clinic on a ‘high’ due to the cold temperatures producing a rush of endorphins (the body’s natural mood elevator) released into the body, which can last for several hours.

Depending on your physical condition, you may feel immediate relief from joint and muscle pain, improved energy, and increased flexibility that can last for several hours or even days after the treatment. 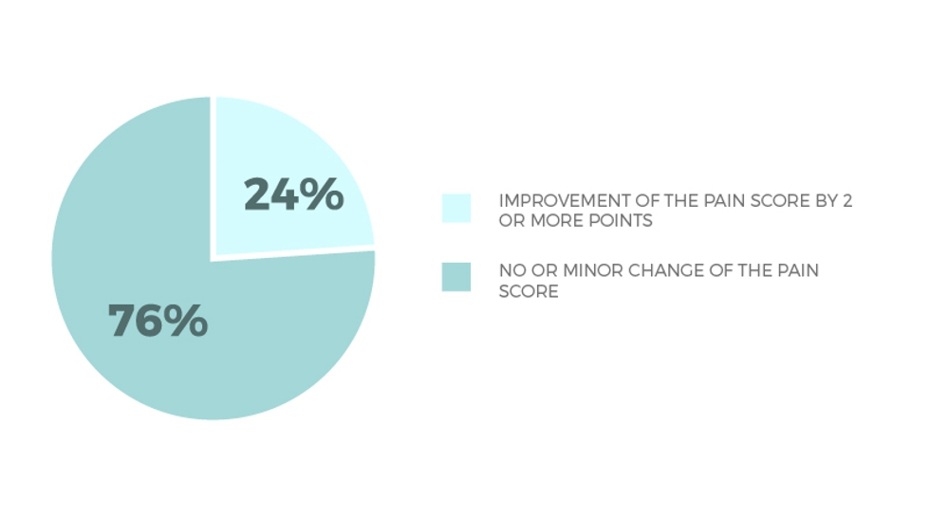 Cryotherapy treatment doesn’t come cheap. Cryotherapy is a growing business worldwide, with many qualified doctors – and unfortunately a number of unqualified medically trained individuals – cashing in on the idea since the sudden spike in number of celebrities using it and promoting it on social media.

One-off treatments can be as much as £95 and clinics recommend that you should undergo the treatment between eight to ten times to make the most of the treatment and feel the benefits.

However, Nigel Mercer, former president of the British Association of Aesthetic and Plastic Surgeons, said British patients are being left wide open to the horrifying consequences of cowboy cosmetic practitioners. It’s important to research and choose the right clinic – do not rush into the first clinic you see with the cheapest treatment on the market.

Prices of clinics in London for a single session:

A. Cryotherapy treatments are not dangerous. The liquid nitrogen used as a chilling agent doesn’t come into contact with your skin.

Q. If I’m claustrophobic, should I have Cryotherapy?

A. The door is never locked and there will always be an operator with you outside, so if you want to stop the treatment at any time, just ask.

Q. Do I need to bring anything to the session?

A. No – the clinic should provide everything for you.

Q. Do I have to prepare for Cryotherapy?

A. You must ensure you eat beforehand and drink plenty of water – it’s important that you’re nourished and hydrated to experience the full benefits of the treatment.

A. The treatment itself won’t hurt you, but the exposure to the extreme cold may be a shock to your system. Those with pre-existing conditions should consult their doctor if they wish to pursue this treatment.

Q. Can I have Cryotherapy if I’m pregnant?

A. No – you should wait until after your baby is born.

A. Yes. Depending on the severity of the injury, recovery times will vary from person to person, but after each session the injury will be improved.

Q. Is WBC essentially an ice bath in a chamber?

A. WBC is a far more advanced, efficient form of ice therapy. Ice baths can be painful and damaging to the skin – WBC is not painful, does not freeze your skin and lasts markedly shorter.

A. Yes you can, but with parental consent and your parent must accompany you to the session.