The characteristics people prioritise when looking for a relationship 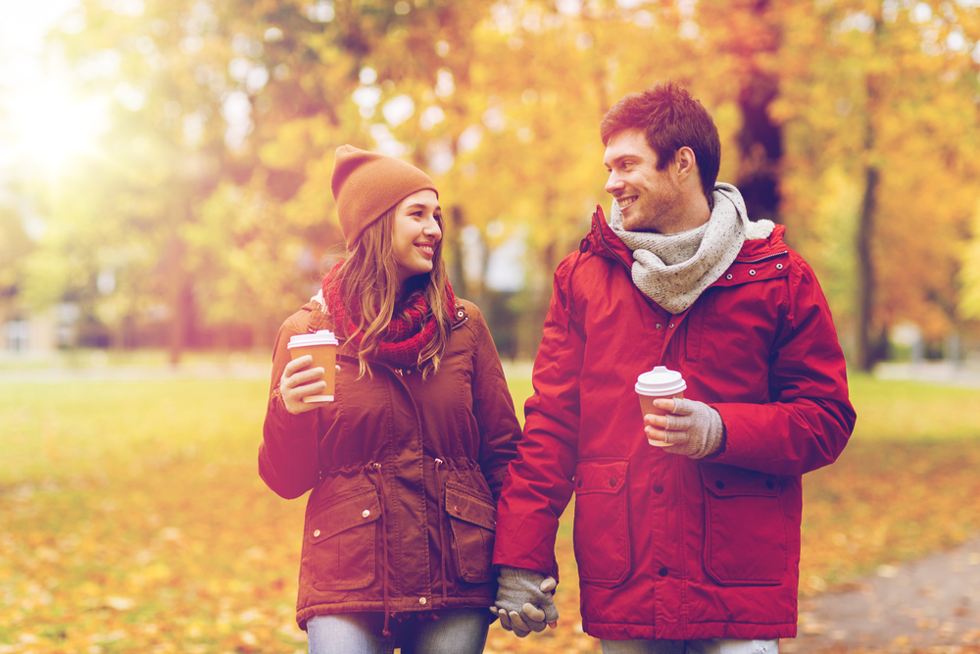 The standard of beauty is everchanging due to the incessant use of social media and cravings of self-validation from others. But with the body diversity movement growing, it’s hard to know whether you should embrace the skin you’re in with natural beauty products or feel guilty for lusting after the latest must-have figure.

The latest figures from BAAPS (British Association of Aesthetic Plastic Surgeons) shows that over 28,000 procedures took place in 2017, which is only fractionally lower than the previous year. The audit also suggested that women tend to focus more on their body as opposed to their facial features, which could be explained by the rise in popularity of non-surgical procedures to “fix imperfections”, whilst around the UK, these remain the most desired cosmetic surgeries. In contrast, men are seemingly shunning surgery all together, indicating a growing acceptance of the infamous dad-bod.

As a result, cosmetic advice expert’s at Flawless.org decided to investigate whether looks are still important in 2018, and if it is still a deciding factor when choosing a romantic partner, or if there are other characteristics people prioritise when looking for a relationship.

The data was extracted from YouGov.co.uk, representing a 2017 survey investigating the characteristics people prioritise in a significant other, asking 680 British males and 929 British females the following questions:

1. “Thinking about your personal preferences in a romantic partner, how would you prioritise each of the following characteristics?”.

2. “Looks Vs Personality, which is more important?”.

The participants were then presented with a list of six possible relationship characteristics and asked to rank them from top priority down to least important when looking for a romantic relationship.

Flawless.org then compared the data to identify whether looks are still a top priority when playing the dating game or if there are other qualities people require in a relationship. 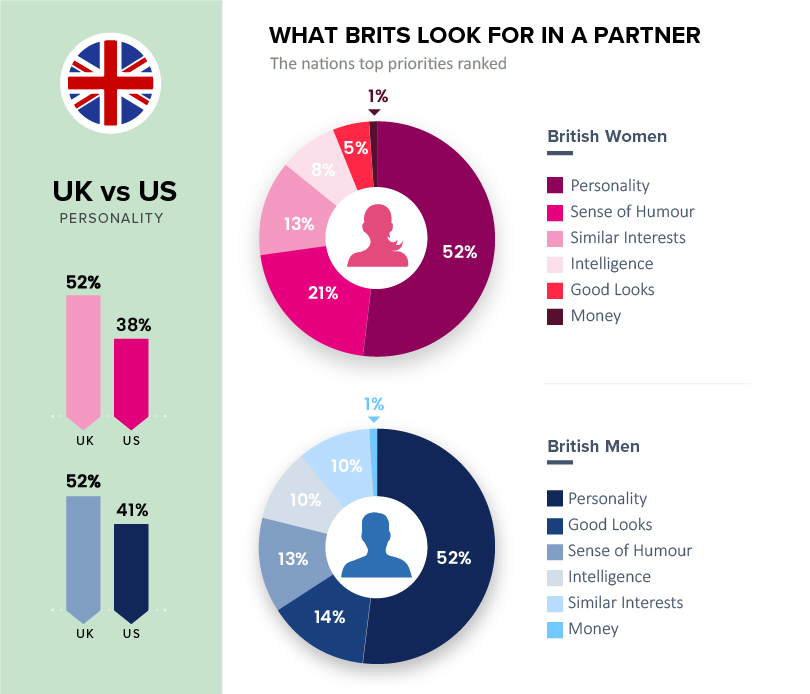 Interestingly, personality came out on top as the number one priority for 52% of British males and females alike, whilst 23% of men and 25% of women ranking it second.

And whilst this may be surprising considering an increasingly digital world we live in, it is also unsurprising that personality is the focus of more than half of Brits. Internet dating apps have never been so popular, and although they may initially be fuelled by looks, you must hit it off before you even consider meeting them in person.

However, whilst personality matters, it seems first impressions do count, as according to 14% of men, looks do still matter, in comparison to the 5% of women. Astonishingly, only a mere 10% of British men and 8% of British women prioritise intelligence above all else when looking for romance, further suggesting the importance personality plays.

One thing the nation seems to agree on is the unspoken topic of money, with a huge 67% of women and 85% of men stating money is the least important factor(ranking sixth), which could be an indication of the current gender pay gap debate. And considering Brits are known for their sarcasm and humour, only 13% of men and 21% of women ranked sense of humour first, whilst an overwhelming majority voted it second (32% men, 33% women).

So how did Britain fair against its global counterparts?

As expected, our friends across the pond had different priorities, with Hong Kong ranking the importance of good looks (33% of men and 19% of women) first, closely followed surprisingly by France. But it seems Denmark is the fairest of them all, with good looks considered a low priority, and personality taking first and second place for Danish men and women. 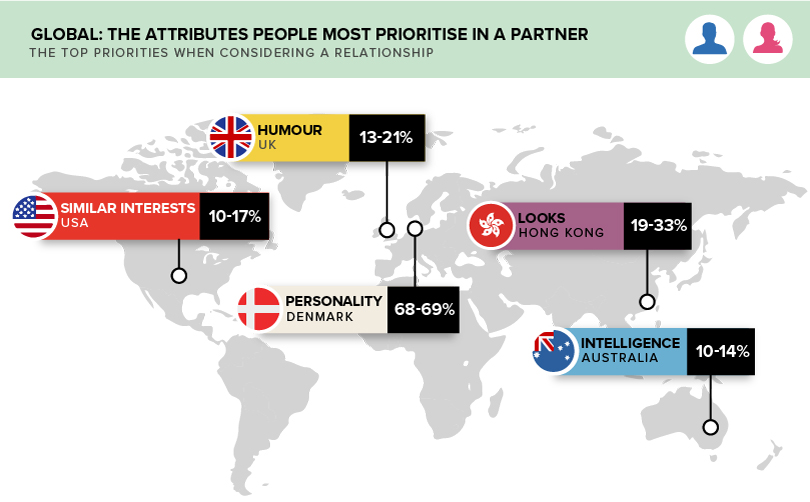 Interestingly, according to the World Economic Forum countries that have a smaller gender gap, such as Norway who rank 2nd in the Global Gender Gap Index, the fewer differences there are between male and female mate choices. Indicating that evolutionary biases play a larger role in those that have a larger gender gap. This would explain why Hong Kong who ranks 100th, put a larger importance on good looks as opposed to non-physical factors.